But I do agree, it’s a horrible question and the person asking it may very well be some kind of horrible while also being some kind of wonderful.

This is going to be a long post, so allow me to four point ‘splain a few things about this question.

The question as worded implies that the foster parent plans to keep the younger foster girl but send the 9 year old boy to a group home.

Is that the only way to read the question?

No, of course not. Almost any question can be read in multiple ways.

For the average person reading the question and responding on Quora, the question is straight forward – the person who asked it is a major asshole.

For foster care “professionals” (social workers, psychiatric staff, long term foster parents, etc), there is a phrase that they latch onto in that question. That phrase is “be removed.”

For “professionals” reading the question, the term “be removed” implies a somewhat clinical procedure whereby a child has been deemed by the state to need some other form of care and will “be removed” from a foster home. Kind of like a cancerous lump on your neck is to “be removed.”  I’m not saying they are the same, but it’s that kind of phrase.

The “professional’s” defense of the foster parent asking the question is that the foster parent is aware of the in-group language and procedures, understands the needs of the child, terms and conditions of the foster care system, and agrees (perhaps grudgingly) with the decision made by the system and thus they have used the term “be removed” which is the appropriate and sanctioned term to use in such cases.

And yet despite all of the foster parents’ knowledge of the system, they apparently need the advice of strangers on Quora about how to break this news to this little boy.  News which DFCS itself states that the foster parents are not obligated to deliver to the child.  This is your first clue as to the motivations of the person asking the question.

If you haven’t figured it out, there is a bias in the “professional’s” reading of the question.

Of course the rest of us are also biased (no one escapes bias). The rest of us just immediately think the person asking the question is an asshole. We have resting asshole bias.

With over 100 answers, this is the type of question on Quora that gets attention over a long period of time.

A few simple changes to the question would have made all the diference in the world.

Here is the original question:

And here is how I would have changed it to make it more clear, assuming that I had asked the question and found myself the recipient of major blow back:

“How do I tell my 9-year-old foster son that we are adopting his younger half-sister, but DFCS/DCFS is placing him in a group home despite our desire to keep him?”

Gee, that wasn’t hard at all.

Score one for “this question is exactly what it appears to be:” a horrible question being asked by a possibly horrible (and also a possibly wonderful person), but who is nonetheless complicit in the outcome of removing a 9 year old to a group home.

The “professional” defends the question by arguing that it’s not the foster parent’s choice. That, for whatever reason, the child needs to “be removed” to a group home. And they are basing this on an in-group reading of a combination of two words: “be removed.”

And my response is: “does he look like a bitch?”

Because if the person asking the question is so deeply involved in foster care as to discern a distinction between the in group language “be removed” and the easily expressed vernacular of  “I don’t want the child to be removed” then that person also doesn’t need the advice of strangers on Quora. That’s what bias will do – it will blind you from the glaring mistakes of your assumptions.

The “professional” answering this has not only fully bought into their own bias, they have failed to examine their own logic when defending the foster parent based on the phrase to “be removed.”

If a foster parent has been around the block a few times with multiple kids, understands the system so well that he/she regularly uses in group language, then he/she isn’t going to ask strangers on the internet “How do I tell my 9-year-old foster son that we will be adopting his younger half-sister, but not him (he’ll be removed to a group home)?”

If you have fought for the child you don’t need the advice of strangers. You know the drill. This child is getting shafted and you know that no one can comfort you as you go through this nor can they comfort the child. Asking strangers about the situation is pointless and futile. You don’t need the advice of strangers on Quora to tell you how to break the news to a 9 year old that his shitty life is about to be even more shitty. You’ve done this. You’re a pro.

The actual”professionals” who claim that foster care is the right solution for these kids are openly stating that the foster parent should’t even bother explaining it because they don’t have to. The system doesn’t require them to.  And they are correct. That is the actual recommended procedure. How’s that for a fully functioning child welfare system?

In other words, the animal is viewed as so dangerous and volatile that they are not supposed to be touched by the people at zoo.

Why in the world would the child be so violent to such news if the foster care system were working and providing the right care for the child?  If foster care is the answer, why would this child be upset at news of moving to yet another club med?

The person who asked the question did not bother to explain the question or correct it. And the “professionals'” answer is so biased that they can’t see the fallacy in their own apologia.

If you want to read the answers on Quora, cool.  Go do that.

But the real basis for this post and the thing that makes my blood boil is a particular trolling exchange I had with one “Ms Morris” – and this being the internet, I don’t know her.  I do know based on the questions she has answered, that she appears to be, or has been involved in the medical community at some point and appears to have some knowledge in that field. I won’t question that, I take it at face value.

So when she answered the original question, it was the first paragraph in her answer that caused me to post a response to her:

“…have seen MANY foster children come in for severe behavioral, complications from mental illness, inability to cope with past trauma, and other issues.”

To which I replied: 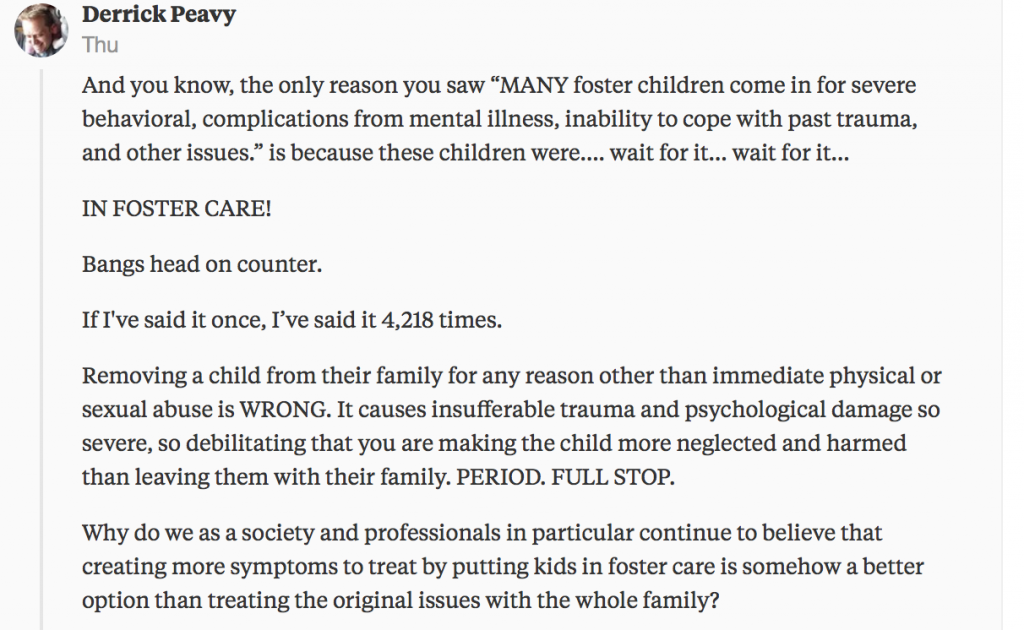 And being a “professional” her response was: 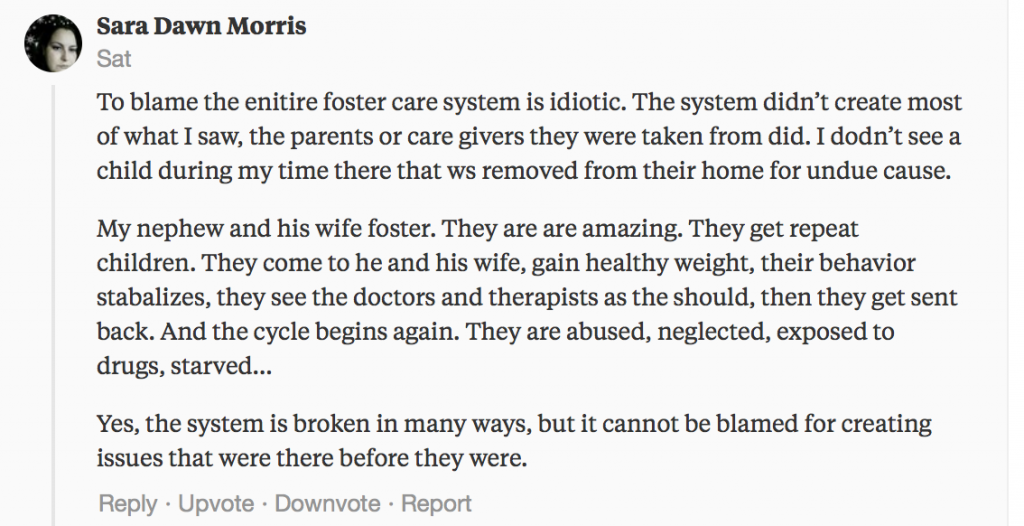 A few things in that reply deserve their own post: “undue cause.” Uh-huh.  “Repeat children.” Do tell. But that’s another post.

The most amazing part of that was “Yes, the system is broken in many ways but it cannot be blamed for creating issues that were there before they [the kids] were [in foster care].”

My God, how wrong and how guilty!  If the system is broken in many ways then it is creating additional trauma and harm. And it has blame. To assert by omission that the prior issues are prevailing over newly created issues is willfully ignorant at best.

And my response was as sarcastic as hers was ignorant: 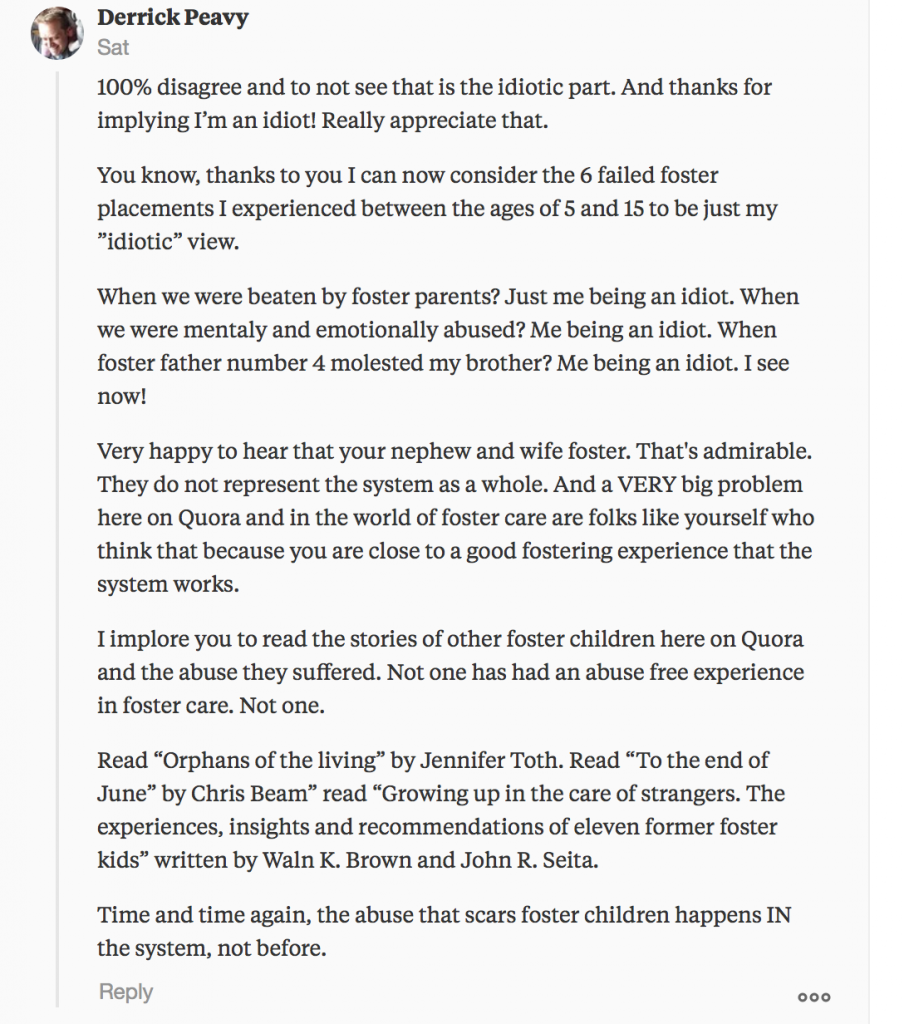 Ms Morris then proceeded to do what all foster care “professionals” do in these situation. Faced with the facts that good people do bad things, that foster care consistently produces horrific outcomes, she proceeds to speaking down to the patient (me) and dismiss all of my comments by stating that I have “a chip on my shoulder.”

And stupidly, I flagged the response because it was just flat out a personal attack and not relevant to the points. Had I put more thought into it, I would have left it for the world to see. Basically, Ms Morris proceeds to tell me what an idiot I am for blaming the system for any ills befallen a foster child and that I have a chip on my shoulder.

I thought about making another reply, but then just decided to flag her comment.

As I explained in a previous post, we foster children and survivors are patient forever.

We are not allowed to not need the care and guidance of the “professionals.” We are damaged. We can’t think straight. We need them to tell us how to view the very system that so harmed and endangered us.

Every single foster survivor I have met through Quroa has a story or 2, or 10 about abuse IN the foster care system. Every single one. (I think there is one exception, a survivor who was very quickly adopted out of foster care as a toddler. I’d have to go back and look at all the follows to find it. This post is long enough. so, I’ll just say there is one exception in that particular sample.)

If you have a child welfare system where it is 100 times easier to find stories of abuse than stories of success, what does that tell you about the system?

If you have a child welfare system where an entire category of literature is devoted to the failings of the system, to the abuse suffered by kids in care, what does that tell you about the sytem?

If you have a child welfare system where people are desperately scouring the internet to find “success” stories what does that tell you about the system?

If you have a child welfare system where half of all females are pregnant by age 19, where half are homeless, where less than 60% graduate high school, what does that tell you about the system?

The “professionals” in the foster system are not the cure. Many do give their love, time, compassion, money and more in an attempt to save the ones who appear likely to be savable. Others simply see their job as a clinical duty, to enforce rules and procedures. Sadly, all are either failing through their own inability to understand survivorship bias or because of a system that is so flawed that no one stands a chance fighting it.

But that won’t stop the “professionals” from continuing on with a failed approach.

One survivor out of 1000 does not justify the suffering of 999 others. We are truly at a point in foster care where we could achieve the same results simply by picking strangers off the street to be foster parents. That is where we are.